The Spanish language news website Eldiario.es has recently written about my work with the Wikimaps Warper on Wikimedia Commons and historical maps.

It also talks about the new role of maps and OpenStreetMap within the wikipedia ecosystem.

“A Frightful Number!” Mapping Daniel Defoe’s A Journal of the Plague Year

“A Frightful Number” uses data culled from Daniel Defoe’s “creative non-fiction” Journal of the Plague Year and from historical sources to track the spread of the 1665 London plague. Created with Hofstra DRC’s innovative mapping tool Itinerary, the site annotates the epidemic’s progress month by month, parish by parish.

As a supplement to the novel, “‘A Frightful Number’” represents and engages with Defoe’s epidemiological mapping of the plague as it makes its way across London and its suburbs, enabling readers to gain a sense of the geography of London to which Defoe refers and a better grasp of the plague’s progression through and impact on the city. “‘A Frightful Number’” also seeks to dissect and analyze the relationship between the novel as a literary form and cartography and how their respective histories intersect throughout the early modern period. Presenting A Journal of the Plague Year in cartographic form helps underscore for readers the difficulties and obstacles that the narrator, H.F., faces as he attempts to “map” and, ultimately, survive the plague, an invisible and elusive entity whose presence is only manifest in its gruesome effects on London’s population. H.F.’s map of the plague is, in this sense, a useful and necessary technology that can make the invisible visible, giving the disease a shape and form in order to better understand its origins and causes, as well as its potential consequences for London and the nation. That said, such a task proves to be immensely difficult, if not impossible, for Defoe’s narrator, who survives the plague but doesn’t seem to come much closer to grasping it in all of its deadly complexity. “‘A Frightful Number’” thus seeks to reflect this sense of ambivalence in Defoe’s novel: to offer a map of the Great Plague that, at the same time, exposes the very real problems and limitations in fully realizing such a project. 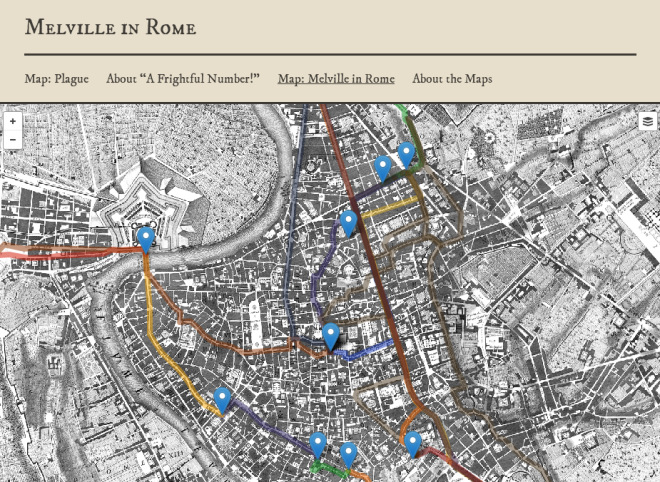