What is Leodis Collections?

Leodis Collections is prototype site for the main Leodis.net website – The Leeds City Council Library’s historical photo website, and the most heavily trafficked site on the councils network. It’s also one of the oldest ones and is desperately in need of a reworking to make it up to date. I worked closely with the libraries team to re-imagine how the Leodis archive, which has over 60,000 images, can work. Collections are curated groups of photos around a theme. 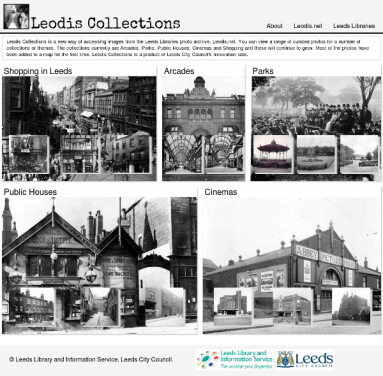 The project was produced as part of an “Innovation Pathway” project with the Council and the Urban Sustainable Development Lab which I’m a team of. The idea is to quickly develop small, cheap, projects to inspire and to encourage future, better solutions. The design was meant to be clean and simple, with a horizontal grid, responsive support and most importantly, not bloated and quick loading. It is live at http://leodiscollections.net/, with links to it from the main Leodis.net site and the councils libraries homepage.

Photos can be georeferenced by users in the application, and shown on a map together for the first time. Collections are groups of photos, and initially we had five such groups: Shopping, Arcades, Parks, Pubs and Cinemas. Each photo can also have associated memories with them which are selected comments from Leodis. Collections can be promoted to appear higher up the list of photos and the photos with a collection can also be promoted to the top. It also has some simple social media sharing buttons, and notably, the images are bigger and have better resolution than on Leodis.net!

The application is written in python and Django and has it’s source code on my GitHub.

There are five main sections of the site:

Here all collections are shown

Here all the photos within a collection are shown, with the locations of the subjects in the photo shown on the map. Map markers, when clicked show a clickable popup. Hovering over the photos in the list shows the image title, and clicking on them leads you to the photo page.

Here the large photo is shown, with some metadata, and a small inset map. Additionally “memories” can be shown underneath. There are links to the photo page on Leodis.net and social sharing buttons. 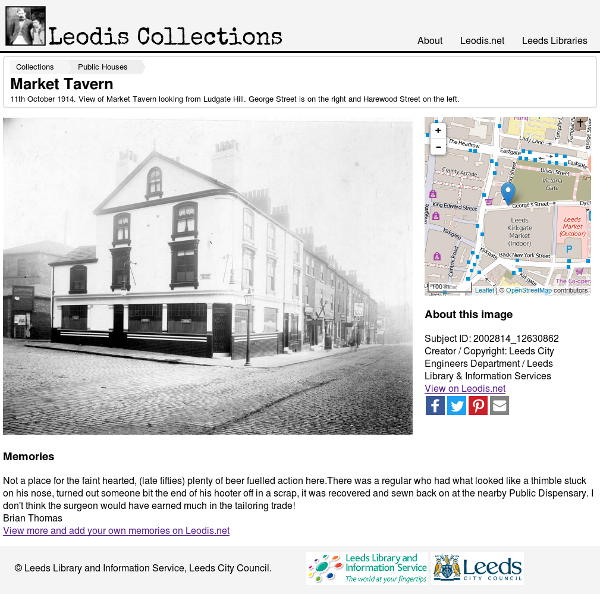 We can compare with the old Leodis.net page (click for bigger):

The process of this project was interesting. The Urban Sustainable Development Lab had a small hackday where a few technologist and council staff came together. During the morning, we talked in a group about requirements etc, and in the afternoon the technologists worked alone on producing mockups, live sites, wireframes etc before presenting the work.

Here’s a screenshot of one of the images of half a dozen in the mockup I produced in that afternoon. You can see that the memories were brought out and placed prominently in the grid design. The grid design was pretty much taken from existing sites like Flickr and Google Photos. I think its a nice concept for images with varying dimensions.

In following weeks my ideas were commissioned and myself and the Library’s staff had a few meetings to go over the design and requirements. Here’s an image from one of the wireframe documents I produced:

The site was then built and iterated upon quickly. For the future, now it’s running we want to add pagination to collections, search for photos, multiple relationships, user corrections of locations, and some more detailed responsive, usability and design improvements.