Many thanks to Ellen Gehring of Erfgoed Leiden en Omstreken for the Dutch translations. Ellen with the ELO wanted their own warper and because of this, support for locales, internationalisation and translations was added to the codebase.  Huge thanks to Kamata Ryo for the work on the Locale Changer and the Japanese translations.

If you would like to see your own language, let me know.  We’ve used both LocaleApp and normal Github pull requests.

This year, with Leeds City Council I developed LeedsAdultLearning.co.uk which is a course finder for about 300 courses by the City and run by a number of providers and dozens of venues. It offers a range of first step courses for adults, such as basic IT skills, ESOL, caring and crafts. Within the first 24 hours of launch it received over 3000 visits, in the first month, it had over 25,000 visits, with the average user spending three minutes on the site.  The code’s up on my LearningInLeeds GitHub repository.

The project evolved from a LCC Innovation Lab – similar to the Leodis project I also worked on. The key idea is that it was designed to be a pilot or prototype project, small in scope and quick to develop, it would aim to be an aspirational example of how the City can work with the Council and open data to make good IT products. The adult education department were fully engaged with the development and design of the project, giving feedback, priorities. This engagement was really welcome and I think the experts say its crucial to any successful agile project. The department didn’t have any online course finder before so this was bringing something new, and needed to them.

It was featured in the Government Technology News site, the Yorkshire Evening Post, on Made in Leeds TV, and was shown on the big screen in Millennium Square.

The project could be altered for other organisations, and it could be altered to include the whole range of courses on offer for adults across the city region. I think usage metrics would need to be done to see what users actually do on the site, and whether the journey planning is useful. Adding extra information about course duration,  how many times a week / month etc would be good. Making it more mobile friendly could be looked at, including making a mobile only app.

Tubesign – was a fun service information sign maker that that I made in 2013 and in 2015 TfL demanded me delete it. It has reappeared in the news, with a sign created by a Windsor doctor (around my age) being read out on the news, a few TV programmes and in parliament, and lots of media discussion about it – with the bias towards the popular “fake news” narrative.

END_OF_DOCUMENT_TOKEN_TO_BE_REPLACED

A couple of years ago I made an open source parody fun image generation  / service information sign maker and today it’s been shut down due to lawyers from Transport for London (TfL).

I made it in a weekend as during the week I was doing my civic duty with some good legal professionals on a period of Jury Service. People made images to share with their friends, make jokes, announce anniversaries, quote prayers, tell poetry, advertise events, leave personal messages and write inspirational comments and so on. I have not seen any offensive images that people made with it either on the site or on Twitter.  When it launched it got a fair bit of praise and positive coverage from many places including BBC America, ITV, The Londonist, The Atlantic Cities, The Guardian, The Next Web, B3ta.com, etc..

This Thursday (10 Dec 2015) I got an email with a scanned letter from a lawyer from Transport for London (TfL), a UK public transport authority. Here it is with names, email and addresses redacted. 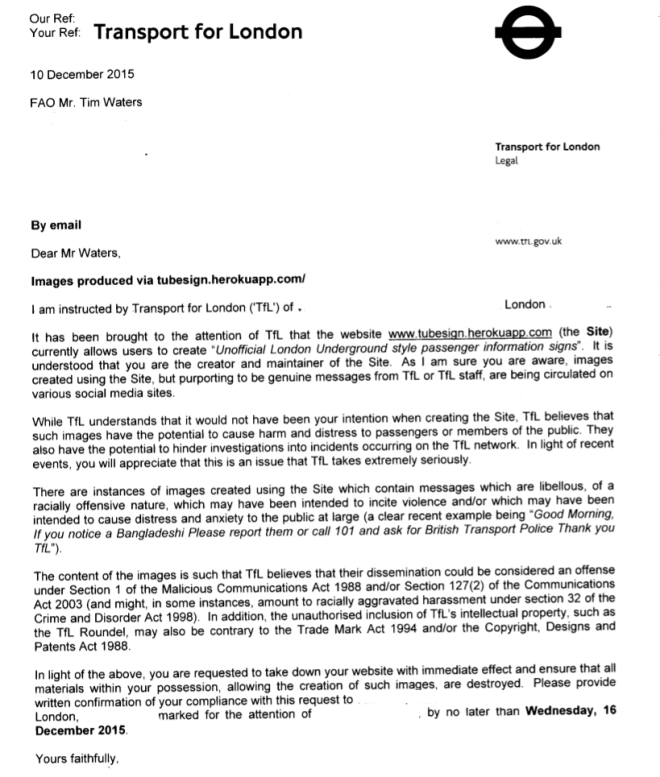 So, I’ve destroyed the site, deleted the code and emailed them my confirmation of that. I decided to do it as soon as I was able (about 24 hours of the request) as I didn’t want the distraction and hassle, so I can get back to work.

As of last Thursday the site tubesign.herokuapp.com is offline and I cannot put it back online. The Ruby code, misc files and the CC-By-SA images on Heroku where it was hosted have all been deleted. My repository on GitHub has also been deleted although others may have copied their own forks of the MIT licensed code. It was only a few lines of unspectacular Ruby code anyhow.

Some people have speculated that this may also have been due to candidate for Mayor of London and MP for Tooting, Mr Sadiq Kahn tweeting one of the images someone made showing the hashtag “#youaintnomuslimbruv”  – and then dozens of people replying saying it was made using the parody website. Perhaps we will never know, it doesn’t really matter. It appears that whilst a Labour MP, ‘Mr Khan is no Corbynite leftwinger‘ but one would imagine that he might stick up for RMT Union members against TfL management. And so should you also support the staff during their industrial actions – it was these same TfL bosses who issued this takedown.

I was surprised to see that letter in my inbox and disappointed that TfL were not willing to be more civil and reasonable in their approach. However,  it’s not the first time TfL have acted in this way before in a case about a fan website about tube map variations – I remember it going around the blogs at the time in 2006.

Big institutions struggle and work slowly with technology but is it just me or is it a bit surprising to see how they have made no progress in almost ten years?

Now back to making some better transport maps.

END_OF_DOCUMENT_TOKEN_TO_BE_REPLACED

The next few posts will cover some pet projects that I did whilst not being able to work due to recent civic duty.  They cover things from the role of familiar strangers on the internet and anti-social networks, through to meteorological hacks, funny memes to twitter bots. The first in this series is about what happens when you use markov chains and radical texts with twitter.

Detournement is a technique now considered to the father of remixes or mashups, but with a satirical political nature. Have a look at the wikipedia entry for detournement if you want to know more about it. Basically you do something to something which twists or re routes it so that it makes new meanings. It was the Situationists, led by Debord who really adopted and ran with this as a practice. 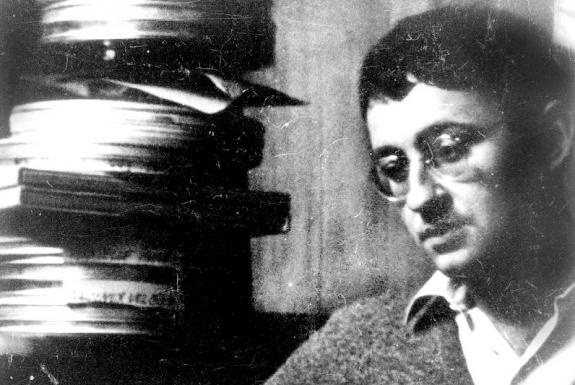 Debord would often frequently plagiarise other radical texts in his own work. (The Situationists were also the ones behind original notion of psychogeography – something that you may have caught me talking about before.)

Bruna Rizzi; it is from this disastrous exaggeration. The peasant class could not recognize the practical change of products

Markov chains basically work like take a couple of sentences: “A lazy dog likes cheese” and “My house likes to be clean” then look at groups of two or three words together. Then if one of these groups share the same word (“likes”), make a new sentence using that word to chain together. “My house likes cheese” or “A lazy dog likes to be clean”. Markov chains result in sentences that look human readable. The more sentences you feed the population sample, the better or more varied the same of generated sentences.

Some radical texts are complete nonsense and really hard to read, so perhaps applying Markov chains to them can help reveal what truths the obscure language hide.

My solution uses Ruby, the Twitter gem and the marky_markov gem.

https://github.com/timwaters/rattoo  is the work in progress twitter bot – it works currently on Heroku using the scheduler to periodically tweet a sentence, see if any other users have asked it questions and reply back to them.

Which will mean me working on lots of exciting geo stuff, and you getting to play with it on GeoCommons.com soon!

Can’t really get into much detail at this time except that GeoCommons shares the same vision of making geospatial data, tools and analysis available for all to use, through the web – the same vision which got me started freelance in the first place, so I’m very enthusiastic.

I’ll still be supporting and developing on mapwarper.net and the NYPL Warper maps.nypl.org – and on that note, expect some eye popping news from Stamen Design related to this soon!  In the meantime have a play with http://polymaps.org/.

Just a little post to help other folks find this hint and tip. I’m using Ubuntu on an Acer Aspire One with the SSD – I recommend fellow Ruby allied Leodian George’s post on getting it all set up if you are interested.

Okay, to make Chromium or Google Chrome to go very fast and use a previously configured RAM filesystem (I used aufs). Use the –disk-cache-dir flag. For example, where /var/tmp is actually held in RAM:

Will get the browser using a cache in RAM, and not the actual SSD. Hope this helps others out there.

Bradford had a barcamp at last, and it was rather good. What was telling was that every single slot was booked out, and repeats of some sessions were requested, and shoved in during breaks.

Cheers to all the folks who organized and sponsored it etc. Ian gives a good summary about what happened.

“Lazy Apps” was the title of my session, and as the room it was in was furthest from the wifi, we didn’t live stream them to twitter. Instead we lazily scribbled them on paper. Here they are for you.

Just a quick note to say that I’ve been to and will be blogging about:

So that’s quite a lot of stuff for my brain to digest… expect to see a stream of posts starting shortly.

Found The Shell Meme over on Caius’s blog and, since it’s a meme that’s entirely voluntary, and doesn’t require me to actively spam other people for them to do it, here it is:
Type this into a new terminal / shell:
history|awk '{a[$2]++} END{for(i in a){printf "%5d\t%s\n ",a[i],i}}'|sort -rn|head

All in preparation of my newer Map Warper which will come out very soon.